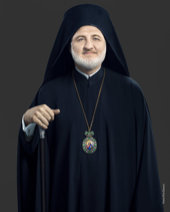 HIS EMINENCE ARCHBISHOP ELPIDOPHOROS OF AMERICA


His Eminence Archbishop Elpidophoros (Lambriniadis) of America, Most Honorable Exarch of the Atlantic and Pacific Oceans, is the eighth Archbishop of America elected since the establishment of the Greek Orthodox Archdiocese in 1922. In March 2011, he was elected Metropolitan of Bursa, and in August of the same year was appointed Abbot of the Holy Patriarchal and Stavropegial Monastery of the Holy Trinity on the island of Halki. He has served as the Orthodox Secretary of the Joint International Commission for the Theological Dialogue between the Orthodox Church and the Lutheran World Federation and as a member of the Patriarchal delegations to the General Assemblies of the Conference of European Churches and the World Council of Churches. He was the Secretary of the Pan-Orthodox Synods in Sofia (1998), Istanbul (2005), Geneva (2006), and Istanbul (2008). He has been an active member of the World Council of Churches serving on its Central Committee and also serving on its Faith and Order Commission since 1996. On May 11, 2019, he was elected Archbishop of America by the Holy and Sacred Synod of the Ecumenical Patriarchate and was enthroned at the Archdiocesan Cathedral of the Holy Trinity in New York City on June 22 of the same year.